I've been working on a new game that's very different from any of my others.  It's called SoothSay and it's only a game in the loosest of terms.  Basically I wanted to create something similar to a tarot deck or an Ouija board and then turn it into a party game to give it more mass appeal.  But really, the game is just an excuse to take part in an activity that (hopefully) is a little creepy.

The "reading" is where all the fun is and it's still being designed, but it relies on the use of a deck of hex cards.  Each card has a letter in the center along with a number.  Along the 6 edges are astrological symbols in either white or green.  The "rules" of the reading are that you shuffle the deck and deal out cards and try to match them up with other cards so that the touching edges have the same symbol in the opposite color.  But the soothsayer has a lot of room for interpretation...  A LOT of room.  I'll provide an interpretation guide, with all sorts of loosey goosey rules on interpreting the reading.  The deck is designed to maximize the odds of spelling something in English while still seeming like your placing cards according to rules that the soothsayer can't change.  Each card also has a color to it so the reading could come from the letters or numbers or colors or the shape made by the cards or anything else that the soothsayer dreams up.

I've ordered a copy.  I'll play it a see what I can come up with.
Posted by Allen Lamb at 2:57 AM No comments:

Playtested Quintavox again.  The Senate change worked well.  We came up with a few additional changes or at least, things to try.

First, the easy one:
Some one pulled a Protection card card and accidentally called it "Justice."  But I think I like the word "Justice" a lot better so I changed it.

There was a suggestion to limit the number of rings in the game when playing with fewer than 5 players.  Which I think was brilliant.  The specific suggestion was to have the same number of many rings of each color as the number of players.  And since each player has 4 pawns that can each take 2 rings, that's 8 rings per person and there are 8 issues, so you would have exactly enough rings to go around no matter how many players you had.  This is a very elegant solution and I might very well go with it, but I had a different but related concern that may change this a bit.  The other concern was that even with 3 players, there was a lot going on..  almost too much to keep track of.  And if you had 2 more players, it might be a bit too chaotic.  So I was thinking limiting the number of pawns you get to 3, but allowing each one to campaign 3 times.  But that's 9 rings per player not 8.

So the next I play, I'm going to try both changes at the same time which means, that there actually be less than enough rings to go around.  That might be a good thing as it give the game a little more drama, but it might also unbalance the game.  But I'm thinking it will actually improve the game.  Each player could only take one more ring than his share, so it's not like one player could go crazy taking rings left and right.  The player it affects most is the one hanging back and watching how things develop (which looks like the winning strategy by the way).  But that player has the benefit of choosing his rings with more knowledge.  Half the rings are pointless anyway.

Another thing to consider is this:  Which rings do you remove in a fewer than 5 player game?  My current thinking is to remove the "1" rings in a 5 player game and the "1" and "5" rings in a 3 person game.  Incidentally, I'm becoming less convinced that the game will work for 2 players.  But since, I have yet to play it with 2 players... who knows.  So for 2 players I suppose I would remove the "1", "4" and "5" rings.

Posted by Allen Lamb at 3:11 AM No comments:

I playtested Quitavox this week.  It played well.  There were a few critiques, but they were all minor.  The first one was that the color assignments for the 8 issues should be changed so that opposing issues had opposite colors.  I actually intentionally didn't do this originally because I was worried about making a political statement with my game by making some issue black and its opposite issue white.  But I decided that game play was more important so I changed colors to make more sense.  I tried to pick the least controversial issues to be black and white:  Expansionism (Black) and Isolationism (White).

Then there were a few issues that I believe I have all addressed (at least partially) with the same change.
So here's the change:  I added a little section on the board called the Senate.  There are 5 spaces there and a cube for each player.  The order of the cubes is used as a tiebreaker for both county control and the end of game.  Players can, for 1 action point, swap any two adjacent cubes in the Senate.  The order is initialized to be in inverse turn order.

Of course, I'll have to order a new copy of the game, but I'll wait until after Monday to do that because I have another playtesting possibility then.  But overall, the game played well.  I think it maybe close to done.  Though I do have to admit, that when playing it, I felt like it was missing something.  I'm not sure if the Senate addition is it or not.  I guess we'll see.
Posted by Allen Lamb at 4:20 AM No comments:

The game that I used to call Cheshire's Kingdom is now called Of Feast & Famine.  I suppose that makes it a "sequel" to Of Power & Glory.  I've actually been thinking about a third one in the line called "Of Intrigue & Inheiritance", but I'll save that for another blog.

I got my first copy of OF&F in yesterday and playtested it with my wife.  I'm actually a bit surprised how well it did by the time I was done tweaking stuff.  Don't get me wrong, there's a lot left to do, but the game was fairly playable.

So here are the things I changed or clarified from my first playtesting (all of this is subject to further change):
Other observations:

That's all for now!
Posted by Allen Lamb at 2:39 AM No comments:

While designing Zodica, I had an idea to use a rock-paper-scissors mechanic in the game.  Well, it didn't work out in Zodica, but I thought that I might be able to use it in another game.  Part of the reason it didn't work out in Zodica is because people could keep straight what beat what.  So I thought I would keep it as straight forward as possible and literally use Rock, Paper and Scissor.  From the start I knew this would have to be a light, slightly humorous game.  So I tacked of the word "Advanced" to give it that "I take myself too seriously" kind of humor.

I started out thinking of a game not too removed from Zodica.  Each card had a rank and a suit (rock, paper or scissors).  It's a trick taking game, but you have to play in structures that are all within the same suit and of the suit that beats the previously played suit.  I went through several variations of this and nothing quite seemed to work.  So I had to venture a little further away and I think I've come up with an idea that may work.  It's still a trick taking card game with three suits, Rock Paper and Scissors, but the traditional ranks are gone and replaced with several attributes.

There are 60 cards, 20 each of Rock, Paper and Scissors.  Each card has 3 attributes on it.  I'm still working on what those attributes are, but I want them to be in the "silly" category.  But for the sake of explanation, I'll use easy to remember, mundane attributes:  A letter A-D, a number 1-5 and a Color (Red, Orange, Yellow, Green, Blue, Purple, White, Black, Grey,  Brown).  What's important to note is that one attribute has 4 possible values, one has 5 possible values and one has 10 possible values.

The entire deck is dealt out.  I'm going to use the same card passing rules that I used in Zodica, then a player starts (I have yet to decide how that player is chosen).  The first player must lay down a single card, the suit doesn't matter.  The next players may choose to play or pass.  Whenever a player plays on a hand in a trick they must play a "Train" of cards that is 1 larger than the previous hand and of the appropriate suit (e.g. rock on scissors, scissors on paper or parer on rock).

So what's a Train?  A Train is a list of cards of the same suit where each consecutive pair of cards has an attribute in common and no attribute value is used more than once in the train.

If all players pass on a trick, the player who played the last hand in the trick wins the trick and puts the cards face down in front of them and leads off again.

That's it!  Pretty simple.
Posted by Allen Lamb at 2:01 AM No comments: 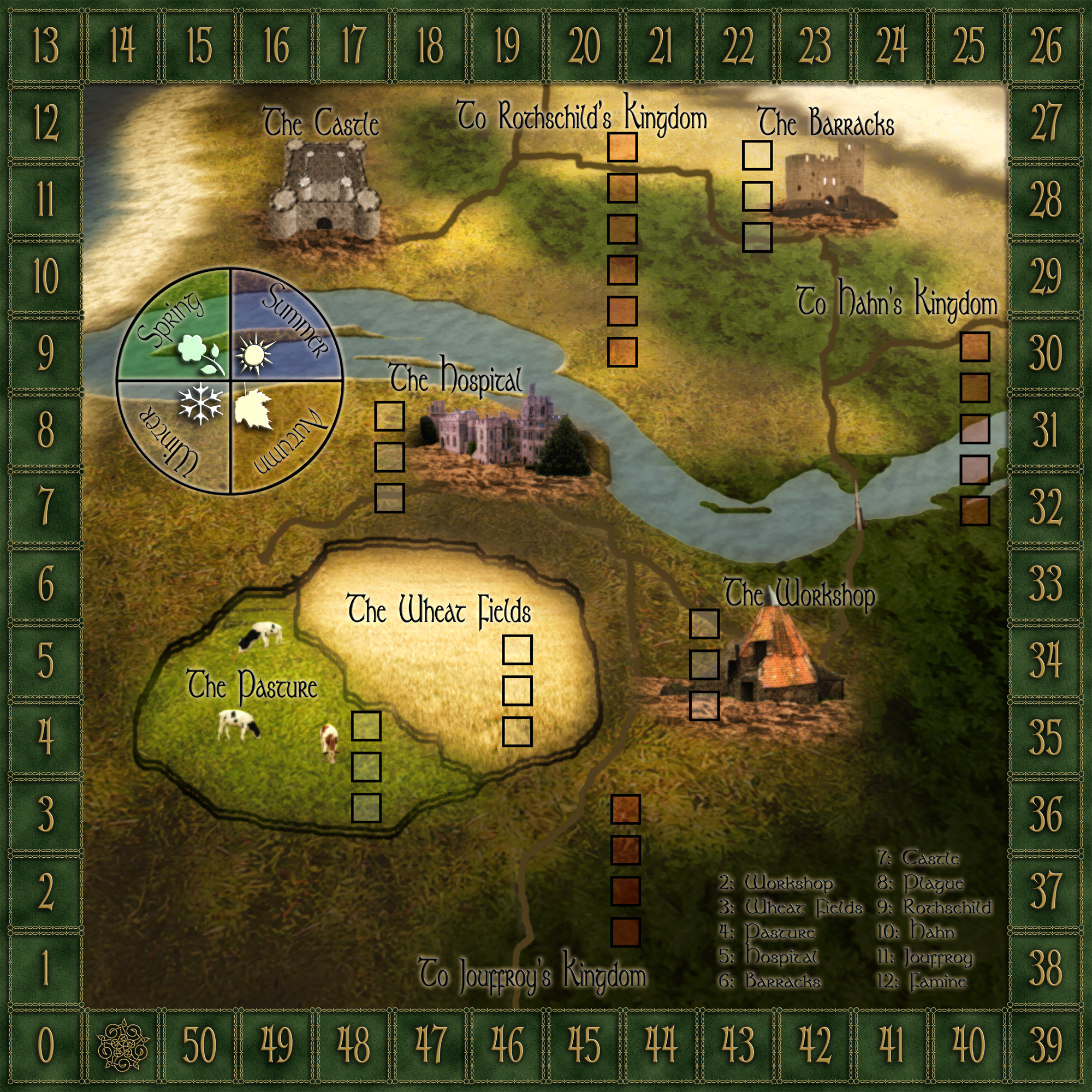 Posted by Allen Lamb at 2:05 AM No comments: